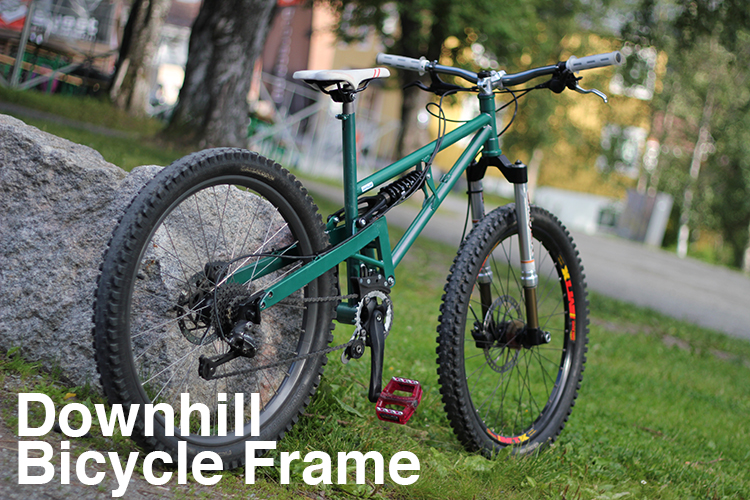 Date: 2013
Background: It's summer, and what's better than your girlfriend suggesting a trip to Åre for some downhill bike riding. Now she's a novice without a bike, but, since I've been into biking for quite a few years now, I thought I had enough parts laying around the house that I could just throw a bike together so that she didn't have to rent one. With maybe too much confidence I said: "Great idea, I'll put together a bike for you, no worries!". Two seconds later I realized that I had no spare full suspension frame, so what's a man going to do but to build one.

So, it's Monday morning, coffee break at work, and I need to make a frame, from scratch. Because of the short time frame I decided to use the geometry from my Specialized Big Hit, but since that has quite a few pivotal points, and those are time consuming to make, I opted for a simple and proven single pivot design. Time to start jiggin', a few bars, some plates and things I found in the scrapheap plus some cones made on the lathe turned out to be a sufficient jig after some (much) alignment, and the rest, as they say, is history.

Final judgement: Compared to my Specialized it's really nimble to flick around the trails. Feels more like a hardcore XC or All-mountain than a pure downhill rig, but then again the Marzocchi Shiver SC fork adds to that. The suspension is very nice despite being single pivot and rocking a low-tier Fox Vanilla R shock. This will definitely be my new AM/light DH bike after some lighter tires have been fitted, but it worked just fine as a novice DH bike.